After posting my recent article on diptychs, I received this curious e-mail from a reader. Graham writes: 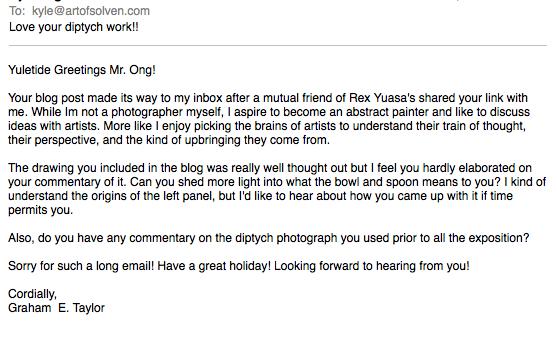 Diptychs are hard because of how multifaceted your ideas need to be in order to avoid literal messages of your juxtaposed pieces. I personally struggled with the brainstorming phase of what I wanted to do and ended up working through my metaphor throughout the drawing process–something I imagine artists do routinely. This style of doing things on-the-fly suits my particular style and provides me the perfect amount of direction and liberation to build upon ideas.

The inspiration ended up being founded upon my dad and how his migration to the United States, work ethic, and sacrifices have all influenced my resiliency as an individual. Additionally, around that time of year I was looking forward graduating and closing another academic chapter of my life. Regardless, my creative muse wanted me to work on something involving socio-economic predisposition, the work ethic between the two extremes, and the differences in societal perception.

The left panel’s allotment of space can be interpreted in a number of ways as I personally don’t have a set perspective of what I’ve done. Focus words I thought about for the left panel included: community, world view, struggle, wear, diversity, and culture. I drew strong, worn hands, and hands of varied gestures in reverence to the great attributes and values shared among immigrants and immigrant history in the United States. To avoid any particular focal points in this panel, I deliberately placed the hands abstractly in space to further inspire the viewer to consider symbolism in the shapes the hands and forearms produce. Again, I made it a point to avoid creating something that would be interpreted literally. In doing so, I was able to organically construct the entire left panel by thinking about hands, the particular characteristics of hands, and how expressive hands can be.

Though this doesn’t speak to every person of affluence, I created the right panel thinking about how narrow-minded the wealthy can be. The silver-spoon in the empty bowl can be interpreted in a number of ways, and I like to start with the perspective of the viewer in relationship to the spoon in space. I groom the viewer to place themselves in the position of a Westerner sitting in front of something as common as food and having the luxury of an intricately designed tool to facilitate in consuming the food. While the darkness can be interpreted as loneliness, I further attribute this idea to the fast-paced, wealth driven executive who works odd hours and lacks the ability to commune with others. Moreover, I invite my viewers to independently consider contrasts in light, the designs or phallic shape of the spoon, and even the skewed proportions of the bowl into what this panel has to do with the rich.

In regards to the photographic diptych, I wanted to invoke a sense of situational awareness to the ephemeral “majesticism” found in our ordinary experiences. Throughout my freelance work I’ve always placed more value into my event and music experience because I felt that there was huge intrigue in a celebrity photographer who wasn’t paparazzi. Because of that pessimism I discounted a lot of the miscellaneous photos I’ve taken throughout my life and have since been inspired to tell stories through them. The shot from under the Coronado bridge was taken during a particularly sunny excursion in the San Diego harbor. I was drawn to this particular frame for the hourglass shape seen in the foreground –my only interpretive hint.

Sometime throughout the cruise I noticed this boy blissfully hiding away from the crowd in his nook who took delight in someone noticing such a funny predicament. While I intentionally desaturated the areas around the child, I maintained the original lighting around him. This illumination reminded me about garden graffiti I had seen on the internet with a quote suggesting that the ethereal moments in life were always ephemeral (I wish I had saved it). Perhaps we do not pay enough attention to our subconscious cognitive abilities and are missing out on a lot of these brilliant a-ha moments.

Either way, thanks for writing Graham.